I packed my bags in an hour. I wanted a much-needed break from work and wanted to have some peace to mind so that I can rejuvenate and give more to my monotonous work life. And now I am moving towards my next destination Uttarakhand,  Auli.

Auli is also known as “Skiing Destination” in Northern Uttarakhand. I had secured myself one week of leave from office and I started my trip from Mumbai as I boarded on a morning flight for Dehradun. From Dehradun, I took the overnight Taxi for Srinagar. I stayed at Mountain View Resort Srinagar. As per my original plan I was supposed to be in Joshimath by evening, but rains had their play. Entire Journey was marred by the fear of rolling stones from the Mountains and therefore it kept our speed slow and we took 6 Hours to Reach Srinagar. After the night’s stay, early morning on the next day, I proceeded further towards Auli. Luckily here, I had a chance meeting with a group of European Trekkers on the breakfast table, as I was preparing to leave for Auli from Joshimath, but meeting with them resulted in an extra day stay in Joshimath ,also some “Big fat Wedding” scheduled on the same day at Auli made it more difficult as all the hotels in Joshimath were crowded and booked. But, No Regrets!

My walk from Joshimath to Chatrakund, to witness the sweet magical water of the lake was memorable. It was a walk to remember. The walk on the mountainous stretches studded with small flowers spreading for an entire stretch of kilometers was beautiful beyond words, Fascinating it was to walk through apple orchards, to do penance in local Garhwali temple in mid of forest. I decided to stay back at Auli in the evening as there wasn’t any snow to hold me back.

My journey from Joshimath to Chatrakund, via Gorsan Bugyal, shall remain one of my most memorable Trek for a long time! Before starting, I was worried, scared and not prepared to walk through such a steep trek without any company. I started at 5 am and reached Gorsan Bugyal by 2 pm(which was way too slower!) and Chatrakund by 3:30 pm. The total time spent in reaching Joshimath back from Auli was 13 hours.

There is a cable car in Joshimath which can take you to the top of Auli (tower 10) if they have a minimum of 10 passengers. Thisactuallyreducesthe Trek by 3 Hours, and normally everyone can do it with family. Besides that, the other way to reach Auli from Joshimath is by hiring a car which could take 25 minutes and cost up to 750/-. Temperatures in Auli are extremely low throughout the year as it is located at about 3000 meters (9800 ft.) above sea level. Auli Ski Cottages is the best place to prefer for a night stay but I would like to suggest that the ideal time to stay here from November to March when it’s all snowy. I wished to stay here for 1 night. Nowadays, Tent stays have become very famous in Auli. The camping grounds are on top of the mountain, and as it rains from the evening it creates mystical fog all around and the mighty Garhwali Himalayas seems heavenly.

Auli, as a destination, is attracting Tourist throughout the year. Including the locals from Uttarakhand. Due to Heat waves in the entire north and vacation, people prefer to go higher to enjoy beautiful weather of Auli.

Badrinath: Next Spiritual Base

Next leg of my Uttarakhand trip was a trip to Badrinath. After a rigorous trek to the Garson Bugyal, I was definitely overworked and the trekking had taken a toll on my feet and my smokers chest was really puffing while breathing thus totally exhausted. After a good night’s sleep, I embarked on my way to Badrinath, at 5 am a start.

Our First Spot was Hanuman Chatta. This temple is a traditional and very famous temple of Lord Hanuman. The temple has a historical significance related to it.  From the Mahabharata, where Lord Hanuman tested Bhīma of the Pandavas, Bhīmahad asked the Monkey God to move away from his tail. To which Hanumanji had replied that he’s too weak and old to move it by himself and suggested Bhīma that he move it himself. Getting irritated, Bhīma tried to move the tail with his mace. He kept trying with all his might that he could use, but to no avail, that is when he realized that whom he was thinking to be an ape was none other than Lord Hanuman himself! Then Bhīma admitted his mistake and realized the importance of humility and how that is significant in a warrior’s life. (As Explained by my Driver, Amit Bhandari)

At Govindghat we(Amit and Myself) stopped to have a look at the most popular Hemkund Sahib. I wanted to visit that as well but parked it for my next trip.(Next on Bucket List). We reached Badrinath by 6:30 and was stunned to see Lord Badri Narayan Temple located in the middle of Magical Mountains which are helmed as the Nar and Narayan Mountains by the locales.

It was a different feeling altogether with River Alaknanda flowing and the sound of water guzzling. Ice Capped Mountains around and everyone chanting slogans of “Har Har Mahadev” Feeling blissful in this charismatic environment for some time, I moved to Tapt Kund Hot Springs, however, I could not take the complete Bath. Just showered a few sprinkles on the head, moved back to the Parking Bay.

10 minutes from Badrinath, visiting Mana village in itself is a very awesome and satisfying experience. This term, “India’s last village” fills both your mind as well as your heart, and ignites that adventurous spark in you, with a sense of accomplishment too. The moment you step foot on its ground, the vividness of nature as it is surrounded by the Himalayas and is on the banks of the river Saraswati grasps your attention. Walked till Bhīma Pul and visited the Vyas caves as well.

We then moved forward to the Indo Tibetan Army controlling the area as the way forward leads to China and Tibet Border on both sides. I was fortunate enough to have a good chat with the militants. It always thrills and excites you to watch army men work diligently in all weathers and securing the borders. Out of vague, gave them a salute on which they all started laughing but responded with “Jai Hind” as well.

Dream to do what I wanted: Rupin Pass Trek 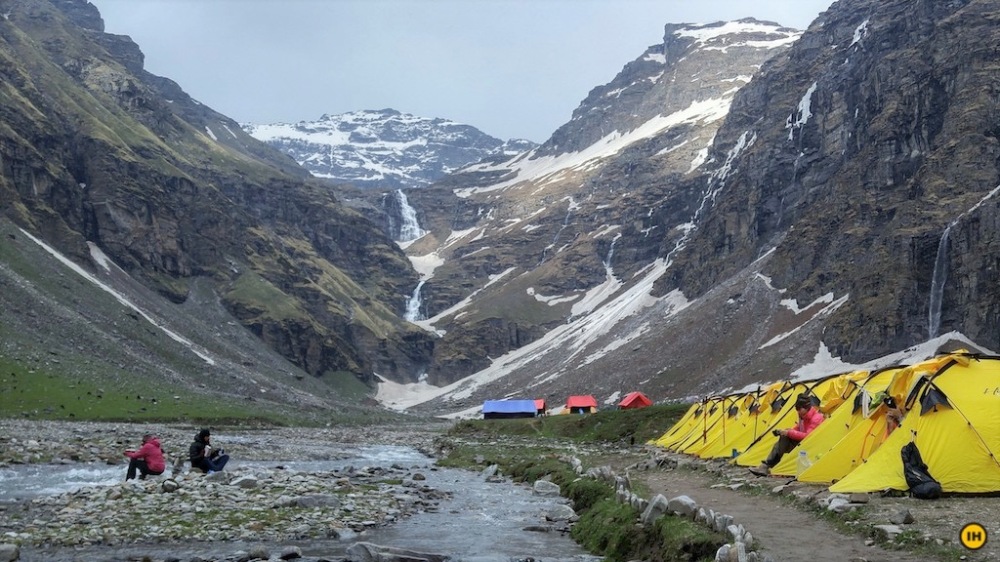 The most beautiful but difficult trek in Indian Himalayas is the Rupin Pass Trek and it was definitely on my list. Had read a lot about Rupin Pass trail. The track is packed with surprises. The three-stage Rupin waterfall at a height of 11,500 ft. is one of the best sights which leaves trekkers awestruck. The scenery changes with every turn you take on this trek. You start from Dhaula a quaint village in Uttarakhand and end this trek in the beautiful Sangla Valley at the Himachal Pradesh. At an altitude of 15,129 ft., it is a difficult level trek. The trek takes you through the traditional villages of Sewa famous for its Shiva Temple and Jhaka, known as the hanging village due to its location at the edge of a cliff. Taking you across ever-changing landscapes from vibrant meadows dotted with wildflowers to dense jungles, waterfalls to an exhilarating pass cross, the Rupin Pass Trek shows you the diversity of nature’s flora and fauna at the best. So, I started on my eight-day Trek. This time was not confident at all. I was not prepared and the difficulty Levels were at the highest. From no way, I was fit for same, but the excitement was so much that I wanted to do the same at any Cost.

Day 1: Drive to Dhaula with fellow Trekkers made me so lively that my confidence to do the trek was at its Peak.

Day 2: Sewa wasn’t really tough but  9Kms was too much for me, I was always left behind and the group had to wait for me. I took 8 Hrs for a 5 Hrs Trek, but I was happy and the feeling “I did it” was more important to me, on the way Visited a Temple where Medals were hanging outside Kinnaur Temple.

Day 3: From here the Trek becomes difficult from a Croppy field to the dense forest, steep slopes and sudden valleys were testing all the trekking skills. Finally, I had to give up as breathing was getting difficult for me and decided to return back but with a promise to come back again next year as more healthy than before to complete the trek in 8 days.

All in all, I had a memorable short break with everything I can in such a short time, It was like living a different life. Going back to Mumbai’s hectic life is like pathetic.

I am spellbound with the beauty of the state and I am busy making my next plan sooner.